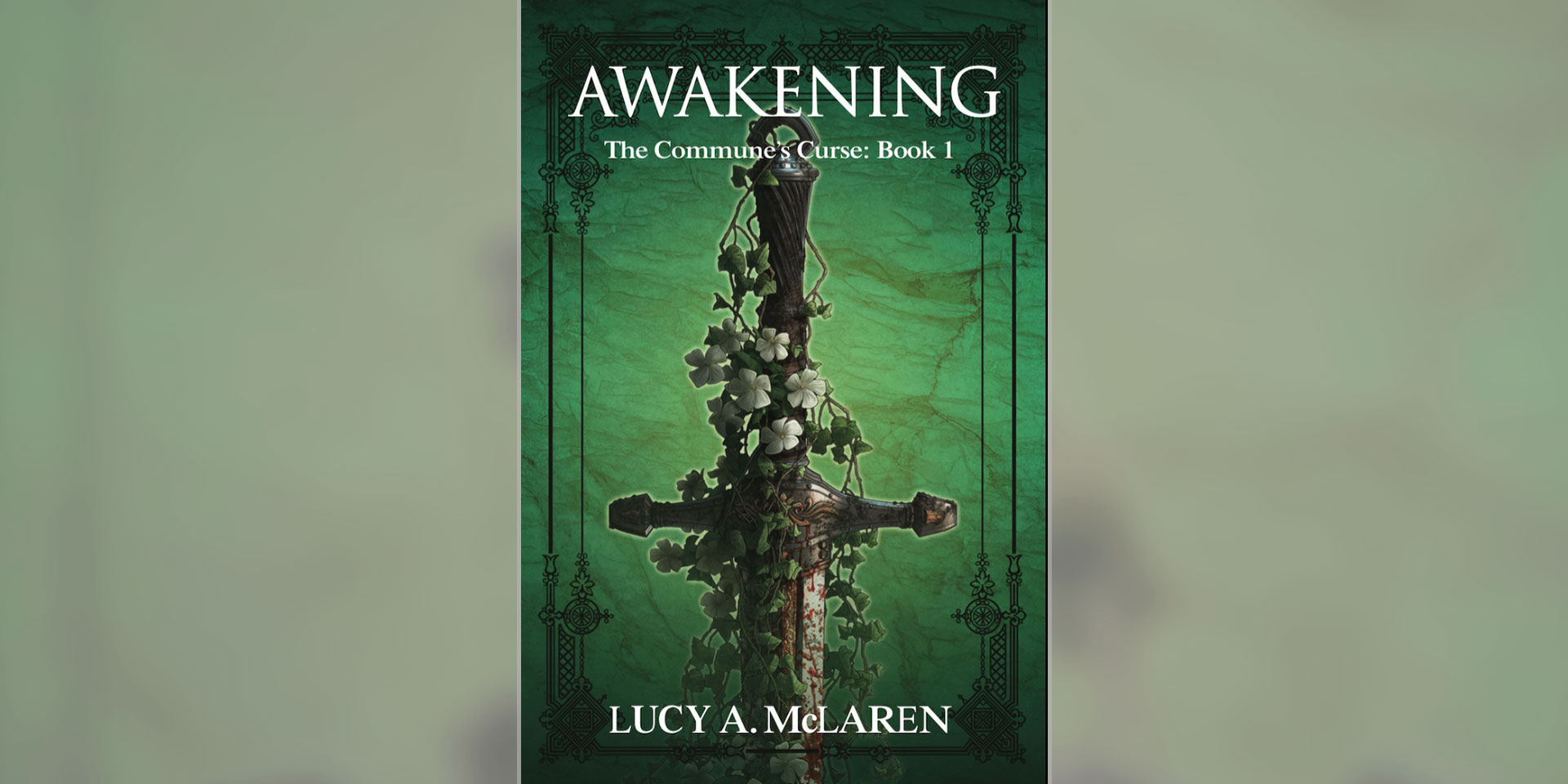 Review of Awakening by Lucy A. McLaren

I was given an eARC to review of Awakening: The Commune’s Curse Book One by the author, Lucy A. McLaren, whom I met on Instagram. This is her debut novel, published through the Santa Fe Writer’s Project, and will be released May first. Let’s jump right into it, shall we?

Pacing: The pacing is quick enough to keep you turning the pages, yet not so much as to make you feel like you’re rushing. It gave ample time to take in the surroundings, which is something I really enjoy in a book. I want a novel to make me feel like I’m there, and it did. I always love to know the season, the time of day, the weather; when an author sets the stage this well, it becomes real in my mind. This book accomplished that. If there were any places where the pace slackens, it would be the middle, while the plot pieces are being set up for the resolution; however, the tension and anticipation kept me turning to pages, and, in fact, served as a place to catch my breath, so to speak, before the story’s beautifully-written climax.

Tone: The world feels dark and ominous, especially as the story progresses, which lends a sense of gravity and realism to the fantasy world, with a lot of the angst being delivered through each character’s inner monologues and emotional reactions to the sometimes horrifying things that take place around them. There are small, tender moments of lightness which feel especially welcome in the grim atmosphere, and the animal characters are a particularly endearing source of some joy and levity.

Worldbuilding: The prologue and early chapters set this up well enough and in an interesting enough way that the remaining worldbuilding throughout the rest of the book happens without taking the attention away from the plot. There are no infodumps to be seen; thankfully, the worldbuilding unfolds gradually as the story progresses through its twists and turns.

Evelyn Folksman: I’ve never seen a female main character quite like Evelyn, and I loved her. She swears at herself, she battles anxiety like many of us do (her harsh inner monologue sounds much like my own), she is tempted by drink in ways that will feel familiar to many. She reminds me of myself and many real people I know, which makes her all the more endearing. She’s been through some difficult things, and that adds depth and complexity to her character even before we quite know what those things could be. She’s not the overpowered warrior princess that so many Young Adult books feature right now, she’s a real person with relatable flaws struggling with inner trauma.

I especially liked how her storyline takes her from under the protection of Bessie as a daughter figure, to serving a protective role to Raif and Rose as more of a guardian figure, like an older sister if not quite maternal in nature, as she does struggle with her personal growth throughout the story. She is an orphan, and it’s poignant to see her form the connections with others she had been missing in her life.

Raif and Rose Huntsman: Rose was an unexpected but welcome character; a little girl with something more to her than meets the eye. She also happens to feel more mature than everyone else at times; she has a steadfast and unflinching demeanor and I’m looking forward to seeing her story unfold in the subsequent books in the series. Raif is not quite a boy, not quite a man and finds himself pulled between the two roles, but grows in maturity and confidence as he progresses. I can’t wait to see who he will become as the series unfolds.

Jonah Sulemon: I adored him immediately, his romantic struggles cut through my heart. His arc in this story was particularly satisfying to read, as he overcame his inner conflict to find the integrity and willpower within himself that he needed in order to follow his moral compass.

What I wanted more of: Throughout the book, as I read, there were only two things I found myself really wanting: more Sulemon, and a talking horse. I don’t want to give anything away but I was very happy with the direction the ending was taking the greater storyline. Everything I wanted to happen, that I hoped would happen in this book, did. As the main character, Evelyn’s arc progressed perfectly; she grew so much over the course of the story, and I was proud of her progress. I related to her in particular, and some of the choices she makes in the story felt like ones I would make in the same situation, even some of the more surprising ones, such as getting drunk and eavesdropping in the middle of the night (don’t judge). Sulemon and Torrant’s complicated and unhealthy relationship came to a head in a very satisfying way, which I won’t spoil here. As I mentioned, though I related most to Evelyn, Sulemon became my favorite character as soon as he was introduced, and I was very glad to have more of him toward the back half of the novel. Also, while reading this book and enjoying the mental communications from the companion animals, as an equestrian, I found myself really wanting to see a horse companion, and the ending of the story hinted that I will be getting that in future books.

Resolution: I know a lot of readers avoid cliffhangers. The ending to Awakening wasn’t exactly a cliffhanger, we get a very satisfying resolution to the most pressing conflicts, but it was to-be-continued, since the book is the first in a trilogy and there is much left of the story to tell. I was very happy with the ending, and I will definitely be following the series to see more of Evelyn, Raif, Rose, and Sulemon. They feel like old friends to me now, and I hope to see them again soon in the next book.

Verdict: If you’re looking for a dark and brooding fantasy adventure with plenty of action, suspense and flawed, realistic characters, this is it! 5 out of 5 stars.

Though I was given an ebook version to review, I have also pre-ordered the paperback on Amazon because I wanted a material copy to keep on my bookshelf. I recommend this read if you’re looking for a darker Young Adult Fantasy novel, with more mature themes and realistic characters. Here is the link!